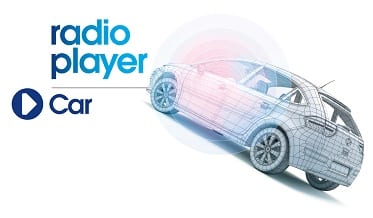 A small box, professionally fitted behind the dashboard, links to the ‘aux input’ on an existing car radio. It connects wirelessly to the driver’s smartphone, held safely in a mount, which is supplied. A free app enables the driver to control the multiplatform radio safely, navigating between stations which have been set as ‘favourites’.

The voice control system is woken by saying ‘Radioplayer’, then the name of a favourite station, which will automatically play on DAB, FM or mobile. ‘Wave-to-wake’, can also be used, by moving a hand near the phone. Station names are announced over the speakers, ensuring there is no need to look at the screen. If the signal varies while driving, Radioplayer Car automatically switches to a different platform, keeping drivers listening via the best method possible.

Radioplayer Car also enables drivers to ‘Bluetooth’ their own smartphone music collections, take hands-free calls, listen safely to inbound text messages and receive instant audio travel news, customised by GPS to their location and direction of travel. The app and the box can both receive updates ‘over the air’, meaning that, even after purchase, Radioplayer Car can be made smarter and smarter.

Developed by Radioplayer (the not-for-profit collaboration between the BBC and commercial radio), the hardware is manufactured under licence by market-leading supplier of car audio interfaces, Connects2. The largest installer of audio products to the retail sector, Hyde Park Corner, are the preferred installer. Customers can arrange for Radioplayer Car to be fitted at a time and a place to suit them.

The two-year development process was a true partnership across the radio industry, with firms like Togglebit, All In Media, Travel For Media, and Furthermore involved in designing and building the software and applications. 40 beta-testers were enlisted from across the UK radio industry, to ensure the system performs well in all cars.

Michael Hill, Managing Director of Radioplayer said: “With Radioplayer Car you get the best of both worlds – a powerful multiplatform radio with hundreds of free-to-air channels, that’s safe and simple to operate. It shows what’s possible when the radio industry works together, and we look forward to sharing what we’ve learned with manufacturers, so that all radios can improve.”

Video demos and more information are available at www.radioplayercar.com.

Patents are pending on several parts of the Radioplayer Car technology. The system, and the installation company, have both been awarded the Digital Radio Tick Mark, meaning they receive DAB, DAB+, and FM, and are ‘future-ready’.