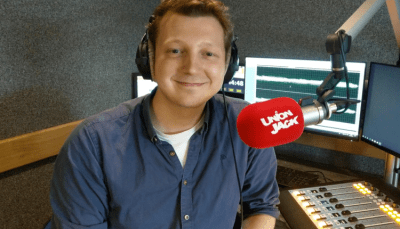 On Friday 13th September Union JACK will launch a brand new breakfast show, The Full English - the first live show since the station’s launch in 2016. The Full English will be presented by the 2018 Student Radio Award ‘Best Male’ winner Adam English, who becomes the youngest Breakfast Presenter on national radio from 7am-9am each weekday.

Union JACK has a different format to other stations as the audience is able to choose the music the station broadcasts via an app.  Union JACK's content focuses on the best of British music and comedy, and an array of high-profile comedic talent can be seen across the station’s schedule.

The new breakfast show will feature well known British music and will invite its listeners to be part of the broadcast. The first show will even feature an authentic Town Crier, delivering listener messages live on air.

“The team at Union JACK radio recognised Adam’s potential way beyond a one-off show and this is evident in him being rewarded with his own daily breakfast show. Don’t think that this is going to be like every other breakfast show though – The Full English is the antidote to the exclusive, ego-driven breakfast show of the wider radio landscape; we’ll be letting our listeners lead the way, not our famous friends.”

Union JACK is available across the UK on DAB digital radio, online at unionjack.co.uk and via the Union JACK app.