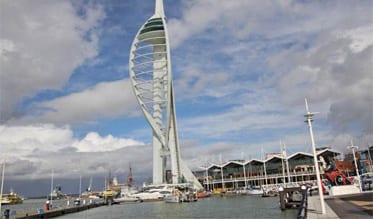 Digital Radio UK today welcomed the launch of Ofcom’s small scale DAB trial in the city of Portsmouth and looks forward to the roll out of the remaining eight trials in cities across the UK in the coming weeks.

The Portsmouth services form the second of ten trial licences that have been awarded for small scale DAB multiplexes bringing radio listeners a range of small and local stations on DAB digital for the first time.

Funded by Government, it is hoped that this new approach could provide an affordable route for smaller stations to broadcast on DAB digital radio.

The first of the trials launched in Brighton and Hove at the end of July and the remaining eight will be launched in the coming weeks, broadcasting for a nine month period. Ofcom will then work with Government to decide on the next steps.

The areas to benefit from the ten licences are Portsmouth, Brighton and Hove, Aldershot, Bristol, Norfolk, Manchester, Birmingham, Glasgow, London and Cambridge, bringing no less than 60 new DAB stations offering a wide variety of services including small local, community and student stations.

Peter Davies, Ofcom Director of Content Policy, said: “There’s been huge interest in these trials, which are another step in bringing new local services to digital radio listeners. Ofcom is helping unlock the potential of this new approach and, if it proves successful, millions of radio listeners could benefit right across the UK.”

Ford Ennals, CEO, Digital Radio UK, said: “These small scale DAB trials are very exciting as we are hopeful that they will enable small scale stations to find a permanent path to DAB in the future. They are good news for listeners delivering great new stations broadcast on DAB digital radio and encompassing stations from all sectors of the radio industry, including community, student and small local stations.

“Angel Radio has assembled a first-rate content line up for this nine month trial, incorporating the great range of services that small stations offer including music services, community services featuring talk and sport, and student radio.”

Tony Smith, Station Manager of Angel Radio, said: “”Our new ANGELxtra service brings a unique choice for Portsmouth’s fans of all things vintage and retro. With this service, Angel Radio builds on its reputation as the home of pure nostalgia. We are proud to be working with our broadcasting partners to bring this exciting venture to the Portsmouth area.”

The ten trial licences were awarded to the following successful applicants and proposed services:

The UK’s first experimental small scale DAB multiplex was set up in 2012, pioneered by Ofcom engineer Rashid Mustapha, who was granted a test licence and installed a low power digital radio transmitter on a Brighton roof-top.

The Department for Culture, Media and Sport is funding Ofcom’s work on how small stations could access DAB digital radio and the equipment available for these trials as part of its digital radio policy.

DCMS has said it will review the possibility of a radio switchover when the Government listening and coverage criteria have been met. Any switchover is unlikely to be until after 2020. DCMS has confirmed that in the event of a switchover of large and regional radio stations that FM would not be switched off but maintained as a home of small local and community radio stations.