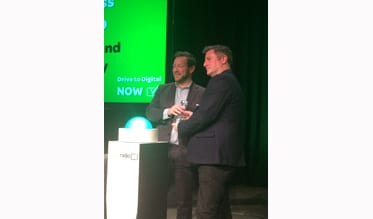 Speaking at the Drive to Digital: NOW conference held by Digital Radio UK and the Society of Motor Manufacturers and Traders (SMMT) at BBC Broadcasting House, Ed Vaizey confirmed that:

• Ofcom has received competing bids from two major broadcast consortia – Sound Digital and Listen2Digital – for the new national commercial network (D2) – this will provide radio listeners with an extra 15 or more digital new stations which could be on air in early 2016; and

Ed Vaizey, Minister for Culture and the Digital Economy, said:

“Digital radio is the future of radio in the UK and I am delighted that Government has been able to play its part in this major expansion which will help accelerate the transition to digital radio.”

The new transmitters are being jointly funded by the Government, the BBC and the commercial multiplex operators. Work to deliver the infrastructure – which forms part of the Government’s long-term economic plan – will start next month (March) and complete in the second half of 2016.

“We welcome the UK expansion of digital radio – it’s great news for listeners as it means that millions more listeners and thousands more miles of roads will be able to receive DAB loud and clear.”

This programme of new local and national transmitters will mean that the national coverage element of the Government’s radio switchover criteria could now be met by late 2016.

“The BBC is playing its part in the development of digital radio across the UK. We are completing the expansion of the BBC national DAB network to 97 per cent of the population this year and contributing funding to expand local DAB coverage thereby ensuring listeners can receive local BBC stations on DAB.”

In his speech to the Digital Radio UK conference, Ed Vaizey welcomed news that competing bids had been received by Ofcom for the new national commercial network (D2) from two major broadcast consortia:

• Listen2Digital which is proposing stations including Fun Kids, the Wireless from Age UK, GEM, Panjab and Chris Country.

Ofcom plans to award the D2 licence by the end of the first half of 2015 and the new stations could be on air early in 2016. The new network will provide listeners with an extra 15-18 digital stations and increases the number of national commercial DAB stations from only four in 2009 to around 30 by 2016, including some on DAB+.

The Minister also emphasised the importance of smaller local commercial and community radio stations. He confirmed as part of a £500,000 Government-funded programme, Ofcom will trial a new small-scale approach to broadcasting on DAB across 10 areas of the UK this summer.

The Minister highlighted progress made on the transition to digital radio over the last four years – more than 61 per cent of new cars now come with digital radio as standard, up from 43.5 per cent in Q4 2013 and only 4.4 per cent in Q1 2010 (CAP/SMMT) at the beginning of the Government’s Digital Radio Action Plan.

He welcomed the significant shift made by vehicle manufacturers, with 90 per cent of the top 20 manufacturers now fitting digital radio as standard in some or all of their cars.

“Bauer is the leading commercial digital radio broadcaster with over 51 per cent of our listening already digital. Our distinctive station formats are showing significant growth, and we have further invested in local DAB with the launch of 12 new stations. In addition, we have a strong commitment to National DAB radio with our Sound Digital bid for the second National digital multiplex.”

“We operate four of the top five commercial radio brands on digital radio with Heart, Capital, Classic FM and Smooth.  We are making a significant investment in local digital radio alongside our partners to improve local DAB coverage to 90 per cent of households. What this means is that listeners can enjoy our brands across the UK in areas where they weren’t previously available.  We are also investing in new national stations on digital, launching LBC, Capital XTRA and Smooth Extra across the country in the last year, with Heart Extra to follow later this year.”

“Halfords is committed to offer our customers the widest range of in-car digital radio in the market with the richly superior listening experience that it offers, and we welcome the significant coverage improvements and the expansion of choice of stations. From early April, all of our digital radio car stereos will be digital tick approved, and with our in-store expertise and nationwide fitting service across 467 shops, will drive further awareness with consumers.”