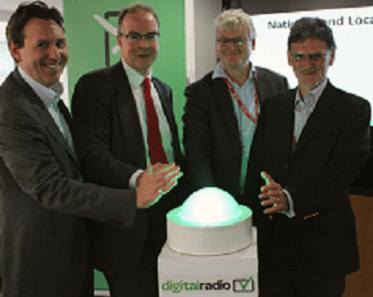 The launch of 435 new national and local DAB transmitters was celebrated this week (28 March 17) during the Digital Radio Stakeholders’ Event at the headquarters of the Society of Motor Manufacturers and Traders (SMMT) in London.

During the event, senior representatives from four of the key stakeholders involved in the expansion of DAB coverage - Robin Holmes, BBC; Grae Allan, Bauer; Glyn Jones, Arqiva and Ian O’Neill of DCMS -  pressed the big green digital radio switch to mark the progress made.

Over 200 DAB transmitters have been built to expand coverage of local DAB stations from 75% to 90% of UK households in a programme of work co-funded by local commercial radio stations and multiplex operators, BBC and DCMS and coordinated by Ofcom. Local DAB coverage is now widely equivalent to FM coverage of local commercial stations, meeting the DCMS local coverage criteria for switchover. During the meeting it was confirmed that the local DAB expansion programme is largely complete with the last remaining few transmitters to launch by the summer.

Alongside the expansion of local DAB coverage, national coverage of BBC and commercial services has also seen a step change since 2013.

The BBC has launched 161 new transmitters on its national DAB multiplex, bringing BBC Radio’s national network of 11 stations to 97% of UK households on DAB and providing more robust coverage for 26% of homes or 13.6 million adults.

New transmitters have also been built to support the two national commercial DAB networks, Digital One and Sound Digital. Sound Digital, which launched in March 2016, was built to serve 77% of UK households, and now carries 19 stations, whilst Digital One’s coverage has been expanded to 91% of the UK and now carries 13 stations, including the newly launched Heart 80s from Global.

During the meeting, Digital Radio UK unveiled the new spring digital radio consumer campaign which highlights that DAB coverage is now available to over  90% of households and prompts listeners to reconsider digital radio with the message, ‘if you think you know digital radio – think again.’ The campaign launches on Wednesday 29 March across national and local commercial radio stations.

Ford Ennals, CEO, Digital Radio UK, said:  “We welcome the massive expansion of coverage of the national and local DAB networks which has transformed the DAB listening experience for millions of listeners and drivers. We are marking the moment with a new consumer ad campaign highlighting that over 90% of the UK can now get DAB stations.”

Tamzen Isacsson, SMMT Director of Communications and international, said:  “With vehicle manufacturers now fitting digital radio as standard in almost 90% of new cars, it’s good to see the UK’s signalling infrastructure catching up so that more people can tune into the full range of local and national stations on offer along thousands more miles of road network.”

Robin Holmes, Head of Commercial, Distribution & Business Development, BBC, said: “DAB expansion is part of a range of technology and product innovations enabling us to make BBC Radio content accessible to audiences however they choose to listen, and to introduce new audiences to the greater range of quality, choice and features offered by digital listening.”

Grae Allan, BDR DAB Radio Director, Bauer, said:  “The expansion of local DAB coverage to be largely comparable or better than FM is a significant step change in securing the continuation of the robust health of radio listening in the UK and broadcasters, producers and sales teams on the ground in local markets to now promote DAB with great confidence to listeners and advertisers.”

Glyn Jones, Digital Radio Operations Manager, Arqiva, said: “Choice and coverage are central to the success of Digital Radio so we are delighted to have worked with the BBC, commercial radio, Ofcom and DCMS to have successfully extended the BBC’s national network and the local DAB network to millions more listeners in the UK. Additionally, we are proud to have launched Sound Digital, the second commercial DAB network and expanded Digital One to reach 90%of the UK.”