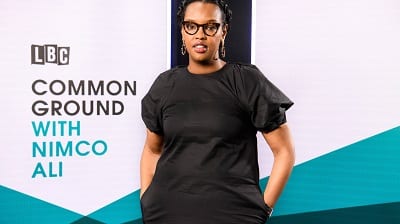 As a survivor of FGM, Ali has dedicated her life and work to the end violence against women and girls. Now working as an independent government advisor, Ali is a champion of women’s rights, as well as the safety of women and girls which is dominating the current news agenda.

LBC’s new podcast, Common Ground with Nimco Ali, will see Ali tackle the difficult conversations that often surround race, religion and gender with some of the UK’s best-known politicians, commentators and thought leaders.

The series launches on 24 March with an in-depth interview with Home Secretary Priti Patel, and future guests include musician and mental health campaigner Jordan Stephens and writer and comedian David Baddiel.

Nimco Ali, said: “In a very black and white world, it’s hard to meet in the middle but that’s where the magic happens. As someone with a very different and interesting background, I have always found that stepping into the space held by those who don’t look or think like me is where we connect and move forward. I am excited to be working on a podcast with LBC and I am looking forward to finding common ground with all my guests on issues that matter to me and to them.”

Tom Cheal, LBC’s managing editor, said: “Nimco Ali is a leading voice in the national conversation taking place right now. A straight-talking communicator, she is the perfect host of Common Ground, drawing on her personal experiences to have honest conversations with her guests about the issues that matter. It’s our pleasure to welcome her to LBC.”

LBC’s Common Ground with Nimco Ali is available on Global Player and other podcast outlets from 24 March.