Hits Radio launches across the UK 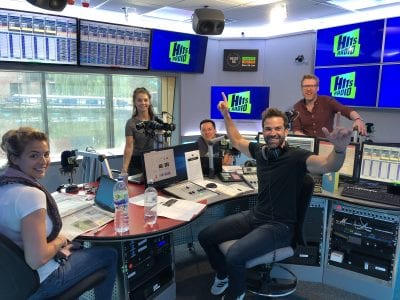 This morning (4th June 2018) a brand new national digital radio station launched called Hits Radio - the only national commercial radio station to be broadcast out of Manchester, from the regions to the rest of the UK.

The new station from Bauer Media is targeting 25-44-year-olds and will air chart hits from the likes of Ed Sheeran, Dua Lipa, Little Mix, Coldplay and Ariana Grande.

Graham Bryce, Group Managing Director Hits Radio Network says: “Manchester is fast becoming a central media hub of the UK and we are really excited to be bringing a new offering to national digital radio, based in this glorious city. As well as our talented presenters and engaging content, we will continue to provide the locals of Manchester with all the relevant regional news and updates through Hits Radio.”

On the stations first show, Hits Radio Breakfast with Gethin Jones, Gemma Atkinson and Dave Vitty were joined by Jess Glynne and the station’s first track was voted for by the listeners – Take That’s Greatest Day, aptly chosen to celebrate one of Manchester‘s favourite bands.

Hits Radio is live across the UK – find out more www.hitsradio.co.uk