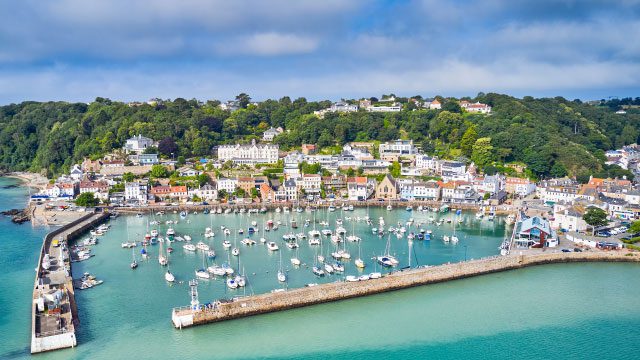 Listeners in the Channel Islands are waking up to a digital radio revolution as local DAB digital radio is switched on for the very first time across Jersey and Guernsey.

The Islands’ DAB digital transmitters went live this weekend from Les Platons in Jersey and Les Touillets in Guernsey, broadcasting alongside the BBC’s existing national DAB transmitters, and bringing a huge expansion in radio listening choice.

Over 20 additional stations are now available across the Channel Islands, on what is now the busiest local multiplex in the British Isles. These include Heart, Capital, Smooth and Virgin, bringing famous voices such as Jamie Theakston & Amanda Holden, Roman Kemp and Chris Evans to the Islands via a free-to-air terrestrial broadcast platform; existing FM favourites BBC Radio Jersey and BBC Radio Guernsey, Channel 103 and Island FM; and additional new services from multiplex owner Nation Broadcasting, including the Islands’ only dedicated decades stations, Nation 70s, Nation 80s and Nation 90s.

The new DAB network will broadcast all services in DAB+, an upgraded and more efficient version of DAB that enables a greater number of stations to be broadcast, and is the first of its kind to launch fully in DAB+, delivering a greater range of choice with more services than any of the UK’s equivalent local multiplexes. To listen to the services via the new DAB+ network, Islanders will need a DAB+ enabled digital radio [See Notes to Editors – 1] or for those services previously available on the Channel Islands, they can continue to listen by their existing means.

Listeners in Jersey, Guernsey, Herm, Sark and Alderney will receive the new network thanks to three new transmitters located in Jersey, Guernsey and Alderney covering 82% of the population and 93% of roads. Whilst the transmitters in Jersey and Guernsey have launched today, the Alderney transmitter will launch later in the year. Islanders can confirm that they are in coverage of the new network by checking their postcode here and may need to retune their digital radios to receive the stations on DAB+ for the first time [See Notes to Editors – 2].

Islanders will be able to enjoy new local services Soleil Radio, Bailiwick 1 and Bailiwick 2, in addition to their existing local favourites like BBC Radio Jersey, BBC Radio Guernsey, Channel 103 and Island FM, alongside some of the UK’s most popular commercial radio stations, including Heart, Capital, Nation Radio, Virgin Radio, Times Radio and talkSPORT. [For the full list of services see Notes to Editors – 3].

Chris Burns, Head of Local BBC Radio, said: “For more than ten years the BBC has been broadcasting its national services on DAB to Channel Islands audiences, and we are delighted to be finally bringing BBC Radio Jersey and BBC Radio Guernsey in digital broadcast quality as well. We know how fantastically popular these services are and no doubt audiences will be delighted to have the choice of digital alongside FM.”

James Keen, Station Director, Tindle Radio, said: “We’re excited to bring the Channel Islands’ most popular stations Channel 103 and Island FM to digital radio. We know listeners love our music and the local news both services provide and now they can listen in digital quality. Plus we’re thrilled to be launching our new station Soleil Radio, the Channel Islands best place to relax. Favourite stations and new choices – it’s an exciting time for radio here in the Channel Islands!”

Capital Breakfast’s Roman Kemp, said: “We’re so excited to bring Capital to a new audience in the Channel Islands and welcome our new listeners on DAB! Listeners can expect shows jam packed with their favourite hits and exclusive interviews with the world’s biggest artists.”

Ford Ennals, CEO, Digital Radio UK, said: “The launch of the Channel Islands digital radio network is great news for listeners as it brings over 20 further stations to the Channel Islands on DAB+ for the first time. Radio station brands such as Virgin Radio, Heart, Smooth, Capital and Nation are among the very best broadcasting in the UK, while local stations BBC Radio Jersey, BBC Radio Guernsey, Channel 103 and Island FM have their finger on the pulse of life on the Islands today. This is a great time for Islanders to buy a new digital radio or smart speaker to make sure they don’t miss a thing from the great new line up of stations now on air on digital radio in the Channel Islands.”