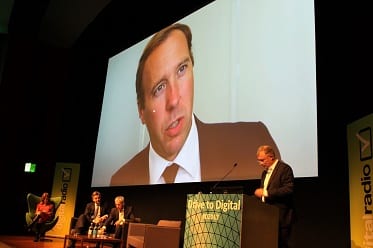 The Rt Hon Matt Hancock MP, Minister of State for Digital, has called for producers and suppliers of radios to ensure all new devices are digital by default in anticipation of the likelihood of a future transition from analogue to digital broadcasting, during an interview featured at a major radio industry conference, Drive to Digital 2017, which took place at the British Museum today.

The Minister was talking via a video interview to 250 industry executives including audio and radio manufacturers and retailers, vehicle manufacturers and broadcasters. Mr Hancock said the Government “strongly encourage, especially new devices, to be digital by default.” He cited the example of the new car market, where nine out of ten new cars now have digital radio as standard, saying it would be “unambiguously a good move to see that replicated across different areas of radio production.”

According to industry GfK data, the majority of domestic radios currently sold are analogue-only. The Minister emphasised that whereas a digital radio would last listeners into the future, an analogue product has a time limit because “there will be a switchover at some point.”

With digital listening now at 48.7% (RAJAR Q2 2017), Mr Hancock confirmed that when 50% is achieved Government will consider whether to set a timetable for switchover, and reiterated the need to proceed carefully saying, “we’ve got to bring people with us on switchover… so  that everybody has the chance to move onto the new technology.”

The Minister’s call to accelerate the transition to digital devices was echoed by Julian David, CEO of techUK, the industry body representing technology manufacturers, and Katrina Mills, Audio and Connected Home Senior Buyer at John Lewis, who confirmed that John Lewis, the UK’s leading radio retailer, is planning to phase out the sale of analogue portable radios in stores and online.

The Drive to Digital conference, which is organised by Digital Radio UK, heard about the progress being made in transitioning UK radio to digital with speeches from leading audio and radio brands, including Roberts Radio, Ruark and Pure, as well as Amazon Alexa and Sonos, and vehicle manufacturer, Audi.

Conference attendees also heard an update on Norway’s digital radio switchover, the first in the world, from Ole Jørgen Torvmark, CEO of Digital Radio Norway, who said that the country’s switchover is almost complete, and running on time and to plan, with the majority of Norwegians taking action to receive digital radio in homes and cars.

The Rt Hon Matt Hancock MP, Minister of State for Digital, said: “It’s brilliant that radio continues to go from strength to strength and a large part of that is due to how it has kept moving technologically. The transition to digital is essential for radio’s future and we strongly encourage all manufacturers to ensure they are delivering digitally-enabled product to their customers.”

Ford Ennals, CEO, Digital Radio UK, said: “We welcome the comments of the Digital Minister and of techUK about the importance of selling digital-enabled radios at retail. In a world where radio listening is transitioning to digital and where all digital radios have FM capability it makes no sense for retailers to continue to sell analogue radios which have a time limit and can’t receive the majority of available stations.“

Julian David, CEO, techUK, said: “We welcome the Minister’s support of digitally-enabled devices, and know that it is something that many of our members would be keen to deliver particularly with the reassurance of a timetable for a propsed transition to digital.”

Katrina Mills, Audio and Connected Home Senior Buyer, John Lewis, said:  “We know that our customers are tech-savvy and early adopters of all technological innovations.  This being the case, it makes sense for us to ensure we are exclusively presenting them with radios which are digitally enabled and begin to phase out the sale of analogue-only portable radios.”

Ole Jørgen Torvmark, CEO, Digital Radio Norway, said: “Norway’s transition from analogue to digital radio is progressing well. In Nordland, the first region to make the switch, listening figures are now hitting the same level as before the switchover. This is in line with our forecasts, and is also what we expect to see for the rest of the country next year.”

Drive to Digital is sponsored by Pure, Ruark Audio, AutoDAB, DTS Connected Radio and POP Audio, and supported by the Society of Motor Manufacturers and Traders.