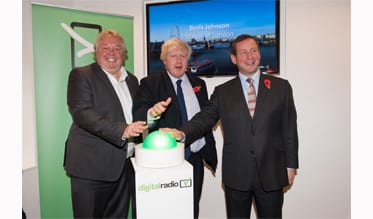 London leads the world in digital radio with over 60 digital radio stations, the most of any major city in the world, it was announced today by the Mayor of London Boris Johnson. After broadcasting his regular LBC radio show ‘Ask Boris’, the Mayor joined forces with Ed Vaizey, Minister for Culture and the Digital Economy, at the Global studios in London’s Leicester Square, to celebrate the diversity of London digital stations and to announce the launch of 3 new London stations and a new national station.

Londoners can receive up to 65 stations on DAB digital radio ranging from national stations such as Classic FM, LBC, BBC Radio 6 Music, Capital Xtra, Kiss and Absolute Radio, to local stations including language stations like Polish Radio London, Voice of Russia, French Radio London, Sunrise and Panjab, as well as specialist music and speech stations including Fun Kids, BFBS, Jazz FM and Gaydio, among many others. Much of London can also receive local DAB stations from the Home Counties.

The new London digital stations announced were financial station Share Radio which launched this week, and new extensions of Kiss Radio, Kisstory and Kiss Fresh which launch in January on London DAB. Bauer Radio CEO Paul Keenan also announced that London station Magic would launch as a national station on DAB in January.

Following a boost to the London digital radio signal in London, at the time of the London 2012 Olympics and Paralympics, DAB coverage reaches almost 100% of the population and all roads. Additionally, there is now 4G coverage across the whole of Greater London and 150 London Underground tube stations have Wifi which means that commuters can also listen to radio on smartphones whilst on the move.

BFBS (The British Forces Broadcasting Service) announced at the London event that they were broadcasting from the Royal British Legion “Silence in the Square” event in Trafalgar Square to commemorate Armistice Day.

The Mayor of London, Boris Johnson, says: “As a world beating city bursting with creativity and diversity, it is fitting that London can claim the most digital radio stations on DAB. With increasing connectivity across the city, Londoners have a wealth of listening choices whether at home or on the move.”

Ed Vaizey, Minister for Culture and the Digital Economy, says: “London loves radio. Digital radio has allowed more radio stations to launch and our capital has embraced this extra choice. The UK has an extremely vibrant media industry with radio as an integral part. The sheer number of radio stations available in the capital is testament to the strength of the UK radio industry.”

Ford Ennals, CEO of Digital Radio UK, says: “Londoners benefit from great digital coverage and a choice of over 60 stations on DAB which is why over 60% of listeners are already listening to digital radio at home, at work and on the move.”

Stephen Miron, Group CEO of Global, says: “We are delighted to host today’s celebration of London digital radio. At Global, we are continuing to invest and innovate in digital radio and introducing two new stations, Smooth Christmas and Smooth Extra in the next few weeks, alongside our existing national digital stations, Classic, Capital Xtra and LBC.”

Paul Keenan, CEO of Bauer Media, says: “The growth of digital means more great radio for the growing London audience. Digital stations Kiss Fresh and Kisstory will be a great success in London. London-born Magic looks forward to a new, national future – again enabled by DAB. With more than 52% of listening on digital platforms, Bauer’s future is digital.”

Gavin Oldham of Share Radio says: “We’re delighted to be launching Share Radio on DAB in London. Personal finance is a vital topic and we’re pleased to be part of such a vibrant radio community in London.”