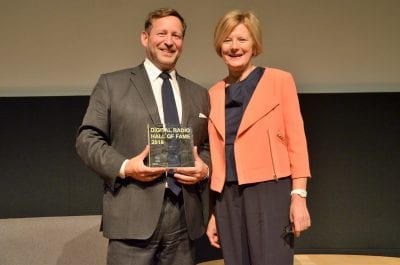 The first inductees to the Digital Radio Hall of Fame were presented with their awards at the leading radio industry conference, Drive to Digital, this week.

The Rt Hon Ed Vaizey MP and Helen Boaden, former BBC Director of Radio, and Dianne Fuller, Global Sales Director, Roberts Radio, presented the Digital Radio Hall of Fame awards to the nine inductees, all of whom were present.

The awards culminated with a surprise presentation to the former Culture Minster with a Special Recognition award for his contribution to digital radio progress during his tenure, which include launching the Digital Radio Action Plan, spearheading the expansion of local DAB coverage, and announcing the second national DAB commercial network.

Reinforcing that the establishment of digital radio as the majority of radio listening in the UK has been a collaborative and cross-industry effort, the Digital Radio Hall of Fame recognises individuals from all sectors and areas that have contributed to digital radio progress, with representatives from broadcasters, retailers, manufacturers, automotive, Ofcom and Government.

“We congratulate the first ever inductees into the Digital Radio Hall of Fame on their recognition and their achievement. It has taken over 20 years to get to a point where digital radio represents the majority of radio listening in the UK and this simply couldn’t have happened without the outstanding contributions of these individuals and the organisations they represent. It was wonderful to see the inductees receiving their Hall of Fame awards from former Digital and Culture Minister Ed Vaizey MP who himself has made a major contribution to UK radio’s successful digital transition.”

The Digital Radio Hall of Fame Inductees are: