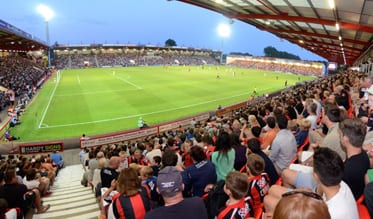 There was a big digital radio boost today in the Dorset area just in time for listeners to hear the Cherries kick off their Premier League debut. New digital radio transmitters were switched on in the area bringing local digital radio to over 100,000 listeners for the first time and boosting the digital signal for many others.

The enhanced coverage means that listeners currently served in the Bournemouth and Poole area will receive a boost to their signal, and are now joined by Dorchester and Weymouth in being able to receive their favourite local stations – BBC Radio Solent, Wave 105, Heart, Capital, Smooth, XFM and Fire Radio – on DAB digital radio. Sports fans across the county will be able to follow the progress of AFC Bournemouth on BBC Radio Solent including the station’s live and exclusive commentary of AFC Bournemouth’s opening match at the Vitality Stadium against Aston Villa on Saturday 8 August from 2pm.

BBC Radio Solent’s Cherries commentator Kris Temple, said: “We’re very excited for Cherries fans across the county, who are now more able to hear our passionate commentary of their local Premier League team. For over forty years BBC Radio Solent has been at the heart of live local sport, and we’re incredibly proud of what AFC Bournemouth has achieved and look forward to every kick of every game on Dorset DAB in this coming season.”

Martin Ball, Managing Director of Wave 105, said: “Wave 105 epitomises what true local radio is about so we’re delighted to offer our listeners in the county of Dorset another platform to listen to us on. The Wave 105 team are incredibly excited about our future on digital radio and the opportunities that it offers us.”

The big Dorset switch-on saw communications infrastructure company, Arqiva, turning on two new transmitters at Poole and Bincombe Hill, as well as boosting the transmitters at St Catherine’s Hill and Winterbourne Stickland. This will increase DAB digital radio coverage for local stations to over 80% of the population in the area – around 300,000 households – and will add many miles of roads into local DAB coverage for the first time.

Arqiva will be switching on a further digital transmitter in Shaftsbury covering the northern part of the area before the year end.

Ed Vaizey, Minister for Culture and the Digital Economy, said: “I welcome the big switch-on in Dorset and wish BBC Radio Solent and the excellent local commercial radio stations great success on DAB. The future of radio is digital and this is part of a major expansion of DAB digital radio coverage across the UK.”

Almost 54% of homes in the Bournemouth area have a DAB digital radio, and 41% of radio listening hours are to digital platforms. Until now many listeners in Dorset have not been able to receive any of their great local stations via DAB digital radio.

The new transmitters are part of an industry and Government programme of work that aims to expand the coverage and listening to DAB digital radio. National BBC DAB coverage has been increased to 96% of the population and the Government, BBC and commercial radio has agreed plans to build a further 182 local DAB transmitters to extend local DAB coverage to more than 90% of the population. This will make DAB available to an additional eight million listeners across the UK and add over 6,700 km of roads into coverage.

Paul Baker, CEO at Celsus UK Ltd, added: “This extension of coverage is great news for listeners on the South Coast of England. As a DAB manufacturer based in Poole, we produce high quality tick marked in-car receivers for drivers. As coverage rolls out towards FM equivalence we are confident that drivers will experience the brilliant choice that DAB digital radio has to offer in crystal clear sound across Bournemouth and beyond.”

Over 21 million DAB digital radio sets have been sold to date in the UK. Digital radio is very popular in cars and 70% of new cars now come fitted with digital radio as standard (CAP/SMMT July 2015).