Digital boost for Wolverhampton and Shropshire 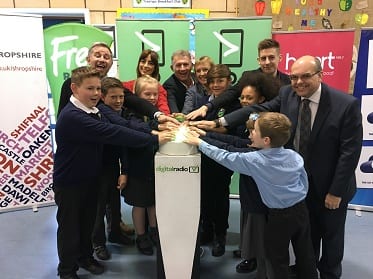 The launch of new digital transmitters that have transformed the availability of local radio services on DAB digital radio for listeners throughout Wolverhampton & Shropshire was celebrated at a special ‘switch on’ event at Newdale Primary School in Telford this morning.

Although DAB digital radios are in over 63% of homes in Wolverhampton & Shropshire and almost 90% of new cars, many listeners in the area were unable to receive their favourite local stations on DAB digital radio before the new transmitters, which have been built by communications infrastructure company Arqiva, launched.

Rachel Cook, Head teacher, Newdale Primary, said: “We’re so proud to have hosted such an exciting occasion on behalf of the county at our school and to have welcomed Wolverhampton & Shropshire’s local stations. The pupils have loved the big green switch, meeting the radio presenters and finding out more about digital radio.”

Tim Beech, Editor, BBC Radio Shropshire, said: “BBC Radio Shropshire has been a major part of life in the county for over 30 years and its great news that now even more listeners can tune in to our hugely popular presenters, delivering the local news, sport, music and entertainment that they love on DAB digital radio.”

David Salt, Content Director, Free Radio, said: “At Free Radio we’re proud to be the number one commercial radio brand in the West Midlands and today’s digital switch-on will ensure even more listeners in the county will be able to hear Free Radio and Free Radio 80s in their homes and cars.  It’s great news all round and moves to expand the ever developing Bauer City Network in the process”

Paul Gerrard, Managing Editor, Heart and Smooth West Midlands, said: “The increase in DAB digital radio coverage is fantastic news for Shropshire and it’s great news for Global that we can bring the UK’s three biggest commercial radio stations, Capital, Heart and Smooth, to more people in the county.”

Ford Ennals, CEO Digital Radio UK, said: “Today we are celebrating the transformation of the coverage of local stations on DAB digital radio across the county. It’s great news that a further 650,000 listeners across Wolverhampton & Shropshire will now be able to hear these much-loved stations, which play such an important role in serving the local community, on digital radio.”

Wolverhampton & Shropshire’s five new digital transmitters are part a programme of work co-funded by Government, BBC and commercial multiplex operators to expand coverage of local DAB stations from 75% to 90% of UK households, in line with FM coverage for commercial radio. Over 200 local DAB transmitters have been built nationwide and the local DAB expansion programme is largely complete with the last remaining few transmitters to launch by the summer. In total, an additional 10 million adults and over 4,000 miles of the UK road network have been brought into coverage for local DAB stations.

Richard Johnston, Head of Commercial Radio, Arqiva, said: “Arqiva has been extremely busy over the last year building hundreds of additional national and local DAB transmitters across the UK to bring DAB digital radio into millions more homes and thousands of miles of the road network. We are delighted to complete the expansion of local DAB coverage in Wolverhampton & Shropshire enabling over 650,000 more people to receive their local stations on DAB. “

Listeners in Wolverhampton & Shropshire are encouraged to retune their digital radios to ensure they receive all their available stations, including the county’s local stations, on DAB.