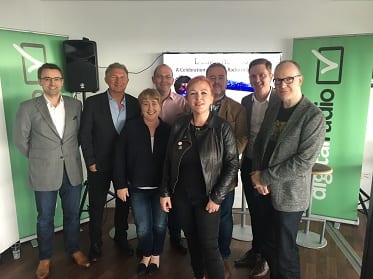 Liverpool's radio broadcasters gathered yesterday (13 June) at the top of the iconic Radio City Tower to celebrate the rise of digital radio in Liverpool and the growth of radio listening. The special event, Doing the DAB: Liverpool, was organised by Digital Radio UK and Radio Academy North West and featured a line-up of leading speakers from BBC and commercial radio in Liverpool.

Attendees heard that overall radio listening in Liverpool has grown by 7% in the last 5 years, supported by 80% growth of digital listening. This has been driven by an increase in the number of DAB stations to 66 and the advancement of DAB household penetration to over 64% in the Liverpool area.

The event heard that capacity for any further DAB stations in Liverpool is now full and currently there are no plans to launch a new local DAB multiplex or a small-scale DAB mini-mux. The latter could provide local commercial and community stations with a route to DAB as has happened successfully in neighbouring Manchester market. Speakers welcomed the passage of the small-scale DAB Bill into law and looked forward to a future review of the DAB capacity needs of the Liverpool market and possibly the launch of a Liverpool DAB mini-mux in 2018.

Ford Ennals, CEO, Digital Radio UK, said: “The Doing the DAB city events are going from strength to strength and it was great to celebrate Liverpool’s dynamic and diverse digital radio market and to hear from the people who are leading digital radio investment and innovation in Liverpool.”

Pauline McAdam, Assistant Editor, BBC Radio Merseyside, said: “Digital platforms are an increasingly important part of how we deliver BBC Radio Merseyside. They bring multiple benefits such as creating more options for listeners to follow the progress of their favourite local sports teams. Last year’s DAB coverage boost has made a huge difference by expanding the number of listeners in the wider Merseyside area who can receive BBC Radio Merseyside on DAB.”

Graham Bryce, Group Managing Director, Bauer City Network, said: “It was great to see such a fantastic celebration of digital radio in Liverpool. DAB allows the whole industry to relentlessly innovate, listeners love it and it has enabled a new era in radio content.  From our Radio City brand in Liverpool to the launch of national digital stations such as KISSTORY,  Mellow Magic and Magic Chilled, today 56% of Bauer’s total radio listening is delivered via a digital device which demonstrates just how much listener behaviour is changing.”

Doing the DAB: Liverpool is the fourth event of its kind, following successful local digital radio events in Birmingham, Manchester and Glasgow.  Digital Radio UK and Radio Academy are planning further events in Cardiff and Belfast this year  to celebrate the strength and diversity of digital radio in major local radio markets.