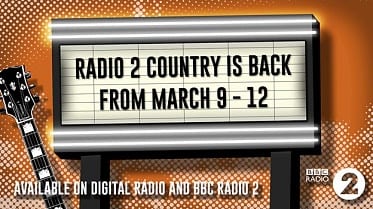 Now in its third year, the DAB service will broadcast from Thursday 9 to Sunday 12 March (midday – midnight) and will feature special broadcasts live from the C2C: Country To Country festival at The O2 in London, plus a wealth of country music-inspired programming.

The Radio 2 Country pop-up kicks-off on Thursday with Welcome To BBC Radio 2 Country With Bob Harris (midday-1pm) – in which Radio 2’s face and voice of country music previews what listeners can expect to hear across the service. Country music specialist Baylen Leonard then takes a look at what the C2C festival has lined up in Celebrating C2C.

Highlights in the BBC Radio 2 Country schedule include Alison Krauss: Bluegrass And beyond, in which the multi-Grammy Award winner chooses an hour of her favourite tracks, and Country Pickers, which sees singer-songwriter Marty Stuart pay tribute to country’s greatest musicians.

The Shires’ Country Playlist will see the UK duo present a show full of their favourite country tracks, and Mark Radcliffe curates a music special exploring the song writing genius and widespread influence of Hank Williams in the hour-long Thanks Hank.

On Friday 9 March, presenters Bob Harris and Jo Whiley introduce music from the C2C: Country To Country festival at The O2 in London (6-11pm). Some of the world’s hottest country acts take to the main stage, and listeners can hear their performances, plus behind-the-scenes action, live on BBC Radio 2 Country (and simulcast on BBC Radio 2 from 8pm). Baylen Leonard joins Bob at the festival on Saturday 11 March (4 – 11pm), with Paul Sexton joining him on the final day (12 March, 4-11pm).

Further special programming on the Radio 2 Country pop-up service comes from Vanessa Feltz as she celebrates the greatest women of country in Vanessa’s Country Gals, and Sara Cox discovers the biggest country names of the decade in Country Sounds Of The 80s. Comedian and country music lover, Susan Calman guides listeners through The Comedy of Country, and Colin Murray looks at country music’s obsession with the bottle in Liquor In The Lyrics, with an hour of songs inspired by whisky, bourbon and beer.

Also this year, in Chris Country on Radio 2, Radio 2 Country welcomes Chris Stevens to the service – the voice of the UK-based DAB radio station dedicated to playing country music.

BBC Radio 2 Country can be listened to on digital radio, online at the Radio 2 website and on the BBC iPlayer Radio app.

To receive BBC Radio 2 Country, listeners can retune their digital radio from Wednesday 8 March by pressing ‘autotune’ or ‘autoscan’.