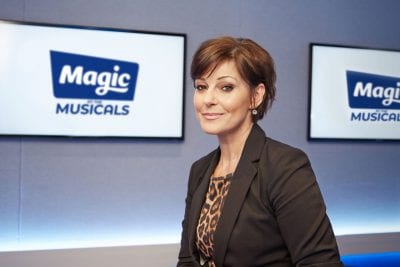 Bauer Media is set to launch a new radio station to tap into UK audience’s love of musicals  - Magic at the Musicals. Launching on Thursday 21 November 2019, Magic at the Musicals will be Bauer’s fourth major launch this year, and available nationwide online, via apps and smart speakers, and on DAB+ in London, East & South East of England.

Magic at the Musicals will be a celebration of the best musicals from both stage and screen, with a playlist including hits such as And I Am Telling You from Dreamgirls and Defying Gravity from Wicked, alongside classics such as Cats’ Memory and Les Misérables’ Bring Him Home. Listeners will be treated to a huge range of musicals from the beloved Mamma Mia! to the anthemic The Greatest Showman and the vintage Singin’ in the Rain.

“Magic at the Musicals will celebrate the dynamic world of musical theatre – from the favourite classics to the latest West End and Broadway hits – and we’ll reflect the growing number of new and re-imagined musicals on the silver screen. This latest addition from the Magic stable will offer targeted access to a premium and distinctive audience of musical loving fans of all ages. It will of course build on our close association with the Society of London Theatre and many of the productions in London and around the country.”

“The station’s name is derived from our hugely successful Magic at the Musicals show which is in its 5th year at the Royal Albert Hall. From a vibrant theatre and cinema scene there’s never been a better time to bring this much-loved genre to the masses. We’ll be proudly broadcasting songs from the shows directly into households across the country. Singing out loud optional!”

“This is a fantastic boost for the industry at a time when theatre-going is at an all-time high. Magic is already our partner on the Olivier Awards, West End Live and other theatre and production projects, so this feels like a perfect platform to promote theatre, and musicals in particular.”

Magic at the Musicals will feature a season of programming to celebrate the creativity, diversity and opportunity in modern British theatre. Telling the stories of those involved, it’s set to shine a light on both the diversity of talent and the many opportunities the industry offers - both on-stage and off - to people from all backgrounds.

Magic at the Musicals launches on Thursday 21 November 2019 on DAB+ in London, East & South East of England and nationwide online, via apps and smart speakers.